Disclaimer: We are affiliates for AppSumo (because lifetime deal are AWESOME!) and we may get commissions for purchases made after clicking links on this page.

AppSumo comes at you with another lifetime deal, this time on Lovo that helps content creators add AI voiceovers on their own in a few clicks.

Whether you’re planning to make an e-Book, movie, documentary, or anything, a voiceover can definitely make any content come to life.

What is a voiceover?

A voiceover is an audio recording of a person talking about the content of a video or anything that the audience sees.

It’s also different from narration even though they both involve reading or telling a story.

Narration is basically a type of voiceover that’s more detailed as it describes everything that’s happening in a video or movie and is widely used for entertainment purposes.

How important is a voiceover?

The award-winning actor is quite famous for doing voiceovers for the past few years because of how powerful and soothing his voice sounds.

Each time an audience hears his voice, whether it’s prerecorded or not, the audience just gets more interested in what he’s talking about.

And if you can agree on that, then you finally understood why voiceovers are important.

Anyone can do voiceovers just like Morgan Freeman even without visiting a studio or hiring someone to do it.

Any computer software can easily create an automated voiceover for you as well.

The only problem is that it may sound too fake and some software cost too much for a voice over that sucks.

Adding a voiceover that doesn’t sound computer-generated is what makes the audience more interested.

For example, you were randomly watching DIY videos on your Facebook feed and came across this video or ad that looks professionally done.

Since audios on Facebook videos are silent most of the time, you still had to turn the audio on by tapping the sound button.

As you heard the terrible voiceover, you immediately closed the video and looked for something else to watch.

I know it’s not that much of a big deal for some, but to tell you honestly, it actually is.

According to one study, 25% of video audiences are most likely to stop watching the video because of the poor voiceover quality.

That’s why you need one like Lovo that can do all of these for you.

Add humanlike voiceovers in a few clicks with Lovo, the newest and one of the best AI voiceover software in town!

LOVO AI is a voice creation software that can help you make the perfect voiceovers for your next media content.

The software itself comes with impressive features to help you create voiceovers in no time.

Start creating dynamic voiceovers in a breeze with Lovo Studio, a feature on Lovo AI where you can customize any voiceover.

Just follow these simple steps to create a voiceover:

Choose your preferred voiceover skin on their growing library that includes more than 180 voices that are available in 33 languages.

Type your script or upload a file that you want to be read for you and hit “convert”.

Make a few tweaks to your sentences by changing the tempo, pauses, and adding emphases to make it sound more natural.

To make your voiceovers sound “extra”, you can also add any background music of your choice to suit your content.

Edit pronunciation easily with this tool in case the voiceover couldn’t pronounce a particular word or name.

Cloning voices is also possible with Lovo and it only takes 15 minutes to generate any custom voice.

Share your wonderfully crafted audio on any platform instantly with the sharing tool that you can find on the right side of your workspace.

Who can use Lovo Studio?

Rather than spending grueling hours editing horrible audio from whatever software you made it with, Lovo makes it easier for you.

Lovo Studio is great for content creators who are looking for awesome text-to-speech technology that doesn’t produce monotonous (and boring) audio.

If you’re an educator, student, or filmmaker, this amazing software will save you time and effort.

This way, you can focus more on finishing your content.

Plus, the program is very easy to use!

You can create voiceovers in a few minutes then download it right away to add to your content.

Lovo has a free version that lets you enjoy premium voice skins for only 3 days and unlimited conversion, listening, and sharing.

The free version is recommended for personal use only since you can download up to 3 voiceovers in a month.

There are also paid versions of the software that has more features that most content creators will find very useful.

Here’s a simple comparison of the different versions:

As you can see the custom voice feature isn’t included in the different versions.

The Lovo Lifetime Deal by AppSumo

Save more when you get lifetime deals on AppSumo!

However, if you already signed up for the free version on the platform, you might not be able to avail this lifetime deal anymore.

The reason is that this exclusive deal is only applicable for new Lovo Studio users who don’t have existing accounts yet.

How much is the Lovo Lifetime Deal?

There are three different license tiers to choose from on AppSumo that come with all the features mentioned before.

So you’ll basically get the same features on each deal, but the only difference is the number of downloads that you can have in a month.

Although this lifetime deal on AppSumo looks too good to be true (and way cheaper), it’s 100% legit and definitely worth it.

Why get this exclusive Lovo lifetime deal?

When you get this exclusive Lovo lifetime deal, you can skip those annoying annual payments, and start using the platform right away.

Take note that this exclusive lifetime deal saves you more money than paying almost the same amount for the same features.

And don’t worry if you already made a one-time payment and realized that it’s not for you after using it for less than 60 days.

AppSumo offers a 60-day money-back guarantee in case you prefer to switch to more expensive software that costs 10x more. 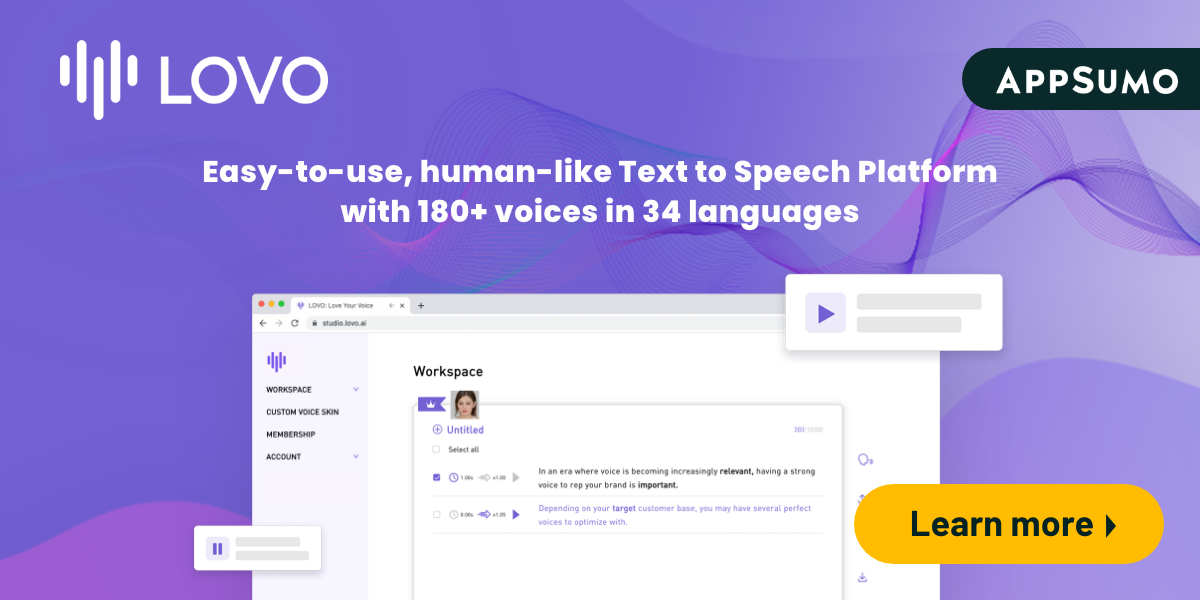 *All links in this sidebar are affiliate links. I get a commission for purchases through the links. Thanks for supporting my site and my mission.

ClickFunnels Has a 30-Day Trial!

It’s only valid through end of Jan. 2022, so claim yours before it’s gone.